“Setting Every Community Up for Retirement Enhancement” Act of 2019 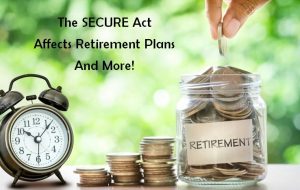 The law includes: Major changes for individuals suck as, the repeal of the maximum age at which traditional IRA contributions can be made, and an increase to the age at which required minimum distributions (RMDs) must be taken. It also includes the so-called “gold star” family provision, which repeals certain changes that were made to the kiddie tax rules by the Tax Cuts and Jobs Act. It extends provisions that expired at the end of 2017 and 2018, many retroactively. These provisions include the exclusion from income for forgiveness of debt on principal residence mortgages, reduction of the exclusion on deductions from medical expenses from 10% back to 7.5%. Back again is the Deduction for Tuition not only for this year but also for 2018 in case you did qualify for the Lifetime Learning Credit or American Opportunity Credit or would just be better off amending and taking the deduction.

There is lot’s in the act it includes a number of provisions that impact employer plans, such as liberalized rules for multiple employment retirement plans, a new small employer automatic enrollment credit, an increased credit for small employer pension startup costs, and expanded participation in employer 401(k) plans to include long-term, part-time workers. The Act also allows long-term, part-time workers to participate in an employer’s 401(k) plan.

It includes increases to the penalty amounts for failure to file income tax returns and retirement plan returns.

There are 1770 pages to the text of the law, they cover many areas from wages for certain government employees, to funding and other changes for many government departments.

Download a copy of the complete SECURE ACT by clicking here.