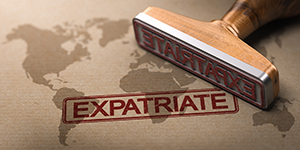 An expatriate is a U.S. citizen or legal resident living outside the U.S. for an extended period of time. Expatriates are required to file U.S. income tax returns and are subject to the same filing requirements and filing thresholds as U.S. citizens and U.S. resident non-citizens.

Like U.S. residents, Expatriates are taxable on their worldwide income. They may, however, be entitled to an exclusion of certain earned income (wages and self-employment income) earned outside the U.S. if they meet one of these two tests: the Bona Fide Residence Test or the Physical Presence Test.

Tax returns for U.S. persons living outside the United States on April 15th are due on June 15th. Extensions of time to file are available until October 15, but the appropriate extension form must be timely filed with the IRS.

Returns must often be filed even when no U.S. tax is due since exemptions for earned income and the credits for any foreign taxes paid can only be claimed by filing a tax return.

U.S. persons living outside the United States must also comply with both FBAR and FACTA filing requirements. The penalties for failure to do proper reporting under FBAR and FACTA can result in sizeable penalties which could match or even in some cases exceed the value of the unreported accounts; they can even result in criminal prosecutions.

We are available to clients outside the U.S. by phone, Skype and email. Just because you live outside the U.S. does not mean you should not have U.S. accountants who not only know the law but who can also represent you in front of the IRS should the need arise. Need a Skype appointment ? Just email us at Info@RMSAccounting.com or call us at 1-954-563-1269.