To be considered a Non-Resident Alien you must not be a U.S. Citizen or Green Card Holder and you must not breach the Substantial Presence Test. You breach the Substantial Presence Test if in any calendar tax year you are present in the U.S. in excess of 183 days, or if during a look back test period you are in the U.S. 31 days in the current year and a total of 183 days in the 3 year period that included the current year and 2 prior years. Days outside of the current year are adjusted as follows for making a determination. If (All Current Year days + 1/3 of days one year prior + 1/6 of days 2 years prior) is greater than or equal 183 days you have breached the Substantial Presence Test and will be taxed as a U.S. resident. For many this is not a good thing as U.S. Residents are taxed on their worldwide income.

There are exceptions to the Substantial Presence Test, based on certain visa’s or if certain conditions are met and the Non-Resident pays taxes in his or her home country. They may be able to claim a Closer Connection to that country and avoid being treated as a U.S. Resident. A closer connection is claimed on IRS form 8840.
There is also an election for married persons to make them both full year US resident aliens. This may benefit taxpayers by allowing them to use the married status of married filing joint, allowing them to use the tax rates for married filing joint, as opposed to the higher married filing separate rates. This is particularly useful where the spouse is not working, and has little or no other income.

We are available to clients outside the U.S. by phone, Skype and email. Just because you live outside the U.S. does not mean you should not have U.S. accountants that not only know the law but who can also represent you in front of the IRS should the need arise.

Need a U.S. Tax ID number? We can help as Certifying Acceptance Agents for the IRS we can certify and submit an application on form W-7 with out you have to send copies of your original documents to the IRS with your application. For more information click here. 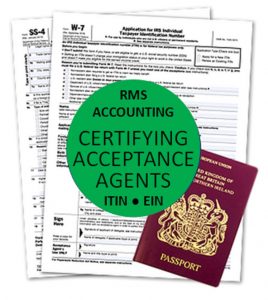